The images on the left and in the middle are examples of interference which is highly unwanted in S&S cameras. Interference takes place in poor quality image sensors and in present NIR optimised image sensors. The image on the right is an example of an image sensor providing immunity to interference – the writing on the register plate is clearly discernible.

1) Maximizing conversion of visible and Near Infrared (NIR) photons to a measurable signal. During the darkest conditions outdoors there is much more NIR light available than visible light. This means that it is essential to have high Quantum Efficiency (QE) for both visible and NIR light (QE refers to the ability of the image sensor to convert photons to a measurable signal). Consequently, under the darkest conditions one should utilise a NIR optimised Black & White image sensor (in colour image sensors part of the light is blocked by colour filters).

Another point highlighting the importance of NIR detection efficiency is that NIR LEDs are often used in S&S cameras in order to provide non-visible illumination (as depicted below on the left). 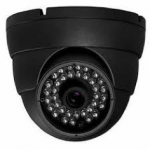 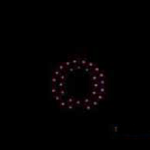 There are two kinds of NIR LEDs, standard and ‘no-glow’ varieties. The standard NIR LEDs have the downside that they emit a faint glow that is detectable with human eye (as depicted on the right). The downside of ‘no-glow’ NIR LEDs is present S&S cameras’ low QE for ‘no-glow NIR LED light when compared to standard NIR LED light (10 % or lower vs 30 % or lower). Image sensors having higher QE for NIR light would considerably increase the popularity of ‘no-glow’ NIR LEDs since cameras equipped with them are not as easily exposed during the night-time when compared to cameras that are quipped with standard NIR LEDs.

Based on afore said the ability to detect NIR light is of fundamental importance for the identification in S&S camera installations.

3) Minimizing crosstalk between the pixels. Visible and NIR photons striking a particular pixel should generate a signal only in the very same pixel so that the signal is not spread out to neighbouring pixels. Poor crosstalk performance smears image details in all lighting conditions, compromising image sharpness and thus compromising identification in all lighting condition.

4) Maximizing immunity to interference. The image sensor should deter both intentional and unintentional interference. Halo generated around motor vehicle headlights masking the register plate or intentional smearing of a surveillance camera image by a laser pointer are devastating features from identification point of view.

In addition, High Dynamic Range (HDR) should be provided. With good HDR an image sensor is able to monitor simultaneously both poorly and well-lit areas of the field of view.

The major overall shortcoming in present outdoor low light S&S camera applications is that identification is compromised in low light, because no single image sensor in the market (unlike the MIG image sensor) offers a combination of high Quantum Efficiency for NIR light, low crosstalk, and immunity to interference at an acceptable noise level. 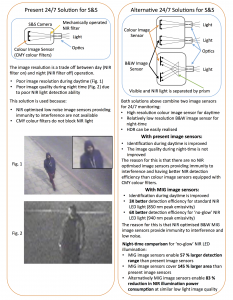