Todays digital cameras produce pictures with amazing image quality, but only if there is enough light. In low light situations, taking good looking pictures becomes really challenging. Often you can see camera manufacturers telling how good performance their new camera product has in low light. It’s because that’s the area where they have most room for improvement and chance to differentiate themselves from competitors. It’s not only professional photographers who desire great low light images, also average point-and-shoot photographers have started to demand performance in poorly lit conditions.

Images taken in low light with present technology include a tradeoff between two artifacts: image noise and image blur. In the below figures you can see two example pictures. The left one has lots of image noise and the right one is blurry. The blurry image is not easy on eyes and if you look at it long enough you will most probably get a headache. The image with lots of noise is easier to look at, and if you must decide, you would probably go for noise instead of blur. That’s also the most probable decision that the automatic mode of any present camera would make. 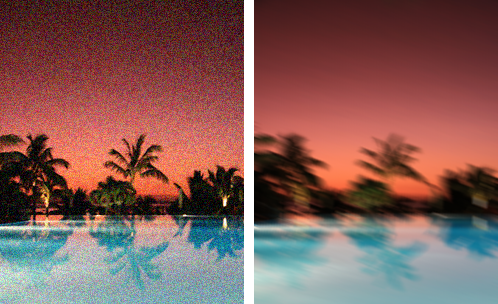 The noise is not a problem if the signal is large enough, it’s the signal-to-noise ratio that matters. In photography, the more light is captured the larger the signal is and the better the resulting signal-to-noise ratio is. Now the question is, how can you capture lots of light in low light? The answer is that you increase the exposure time, but, as most things in life, increasing exposure time has its side effects. To get a sharp image using a long exposure time your camera and the subject you are trying to capture should be relatively still during the whole exposure. If your camera has an image stabilizer the pitch and yaw motion can be compensated, at least to some degree, but it cannot correct camera roll motion or subject movement.

One way to avoid image blur with long exposure times is to divide the long exposure time into shorter intervals, i.e., to take multiple pictures with fast shutter speeds. Each image would be sharp, but the signal-to-noise ratio would be relatively low. When they all are combined using intelligent software, the signal-to-noise ratio can be improved substantially. There are already some cameras that utilize this idea, for example Sony’s NEX-5 (review here).

Whereas Sony is implementing image blur correction algorithms into their cameras, Adobe has developed a post processing algorithm that can correct image blur (video here). As the processing power in hand held devices is constantly increasing, the future of computational photography looks really interesting.

P.S. We made an html5 application to demonstrate the idea of using NDCDS readout to correct image blur. The app was made for Pixpolar’s demonstration needs and therefore it’s not optimized for many different platforms. You can check it out if you have an html5 ready browser running on a relatively powerful desktop environment. Have fun with our demonstrator!