In security and surveillance applications identifications is often done from a stored video stream. Especially in the low light outdoor applications the signal-to-noise ratio in single video frames is often too low for identification. However, one can look after periods in the stored video stream when the subject remains more or less still. By merging frames together during such a period the signal-to-noise ratio and thus the identification can be improved considerably.

When multiple frames are merged together Pixpolar’s MIG technology enables much better image quality than conventional technologies. The below Figure presents a simulation result comparing the signal-to-noise ratio of merged frames in case of MIG and high-end CMOS Image Sensor (CIS). 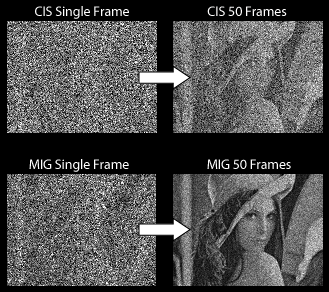 Figure 1. Simulation result presenting the signal-to-noise ratio enhancement when multiple frames are merged together in high-end CIS and MIG technologies. The simulation was done for low intensity Near Infra-Red (NIR) radiation which dominates in the darkest conditions (850 nm, 50 photons / second / pixel in the lightest areas). The Quantum Efficiency (QE) in CIS was set to 28 % and in MIG to 70 %. Dark current in CIS was 0 e-/s/pixel and in MIG 1 e-/s/pixel. The read noise in both sensors was 1 e-. The frame rate was 25 fps and in total 50 frames was merged together. The simulation was done with Pixpolar’s image sensor simulator found at http://imager-simulator.appspot.com.

Technical Note:
To get good Quantum Efficiency (QE) in NIR the sensor should be relatively thick. Due to MIGs fully depleted backside illuminated structure the MIG sensor thickness can be optimized unlike in CIS where cross talk becomes more and more an issue when thickness is increased. The QE values for the simulation were chosen to best reflect what is achievable in the technologies without compromising too much other performance parameters (the QE of CIS was picked up from an existing high-end sensor). The low dark current values used in the simulation were set expecting that both sensors were cooled down. The higher value in MIG is due to thicker and more optimal structure for NIR.

Pixpolar’s MIG pixels incorporate a Non-Destructive Correlated Double Sampling (NDCDS) read-out method, which enables low noise read-outs without destroying the captured signal. In conventional technologies the signal is always destroyed when low noise CDS read-out is done. The difference between the read-out methods is seen in the image quality when frames are merged together. In case of traditional destructive CDS, the read noise of the merged image adds up in a root mean square fashion whereas in case of NDCDS the read noise is reduced.